No Photos at Restaurants?

How would you feel if you couldn’t photograph your food at a restaurant?  Would you still want to eat there?  I was disappointed not to photograph my food at Per Se, but then it was Per Se, so it was an exception.  I would think twice about eating somewhere if I couldn’t take photos.  I’m not obnoxious about it though.  I just use my phone to take photos and if I can get a decent picture without flash, I don’t use it.  I can see how it would get annoying to other customers if one is there with a tripod and huge lens, etc.  But is it any more annoying than customers having phone conversations?  I think it should be up to the restaurant, whatever its culture/policy is, but I do think that a lot of people want to blog today and that restaurant may miss out on potential diners if they do prohibit photography.

Today is Hunting for the Very Best’s 4th anniversary.  Yes, I started this blog back on July 3, 2009.

July is National Ice Cream Month, so I’m doing a Sweets Week with a focus on frozen treats like ice cream and frozen yogurt.

The staff at Yogorino say a lot of people come just to take a picture of their mural, that famous one of men eating lunch on a steel beam high in the air of the NYC skyline.  Only in this photo, the men are eating something else.

You guessed it, frozen yogurt.  Yogorino is a bit different from other frozen yogurt places.  The Italian company’s philosophy is one of health, in the form of probiotics and their benefits.  I can get on board with that.  It’s also not self serve, and there is only one flavor of yogurt.  But at Yogorino, that’s all you need. 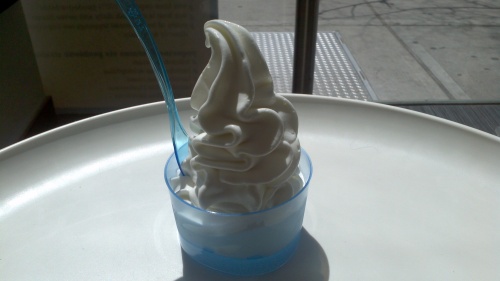 Verdict:  This yogurt has a unique flavor, a creamy tart flavor unlike any other in the city.  And of course, there are toppings, such as fresh berries, which I have gotten before.  However, the yogurt itself is so good here that I eat it plain.

I just read this post on food photography from Yammie’s Noshery.  It was really helpful.  I had some ambitions for my blog for the New Year, one being my photography.  Things have gotten off to a rocky start, so I haven’t had much time to focus on goals for my blog.  However, this post helps to keep it fresh in my mind.

Food Photography for Your Blog

Food photography is a topic of interest to any food blogger who wants to make the photos on her blog look professional and stunning. 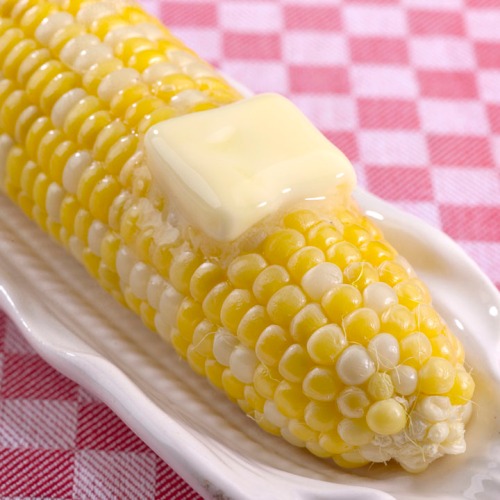 I met with Bill over lunch at Madison & Vine in Manhattan to discuss his book and career in food photography as well as his hints and tips for taking professional-quality food photography for food bloggers.  Bill says he doesn’t mind giving away the tricks of the trade.  Each photographer has his or her own eye, called the point-of-view, and would all have a different perspective when photographing the same scene. 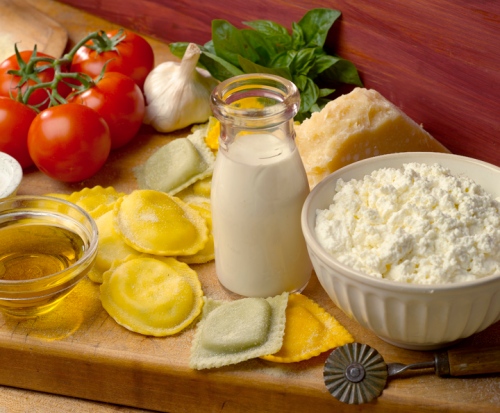 Bill says the top two important areas in photography are light and composition.  When photographing food in a restaurant, he says, the best seat in the house is one near the window where you can get access to natural light.  “Food likes to be lit from behind,” he says.  Direct sunlight is not the best though.  “On an overcast day, the light is perfect,” he says. “Food likes diffused light not harsh light.  If you’re sitting outside or by a window, you have a better chance of getting a good picture.”  Bill’s biggest no-no is a flash.  “Artificial light makes the food look off color,” he says. He recommends purchasing a small diffusion panel–easy enough to fold up and carry in your purse–to use to reflect light off of.  Either that, or a white plate held in front of the subject as you photograph. 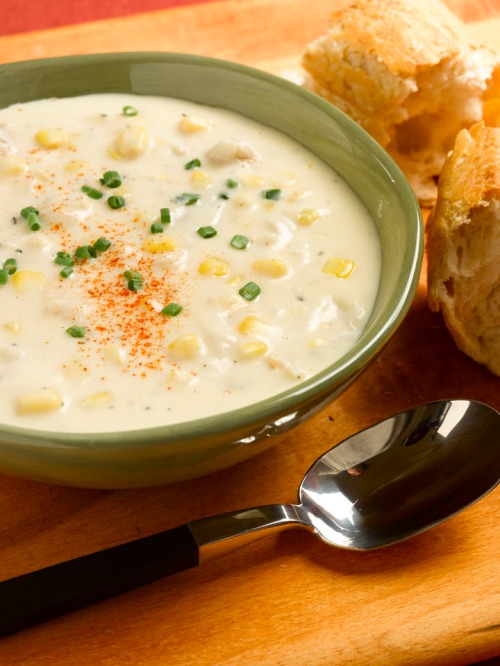 Composition is the second area to focus on when photographing food.  Bill says to move the dish around to find what part of the food looks best.  He says if you’re photographing a roll, which he proceeds to do as an example, tear it to show its texture inside, put a pat of butter on a butter knife and lay it across the front of the bread plate to create more interest.  “What you’re doing is manipulating the surroundings,” he says.  Then decide what angle you will shoot from.  “If you want more drama, you shoot from below, looking up at the food.  If you shoot from overhead, it’s more graphic,” he says.  “You could focus on a particular area and something else becomes a background element.”  Bill adds, “Compositionally, the closer you get to the food, the better.”

I take a picture of my dish as I normally would, with a camera phone and flash.

Then I take one with natural light and a close up.  (We were seated in the middle of the restaurant, so the lighting was not the best.) 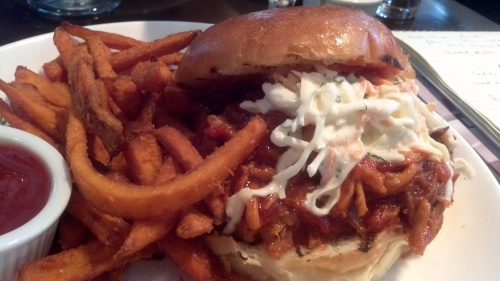 Bill recommends a point and shoot camera over a camera phone.  “A good digital SLR is not that expensive,” he says and will last you at least five years.

Bill shoots with a medium format camera.  It’s more expensive, he notes, but more professional in terms of the results you get.  He also likes shooting manually so he can control every aspect.  Starting his career in photography in 1994, he worked with a food photographer and learned the food photography business, which he began doing in 1999.  A trip to Italy solidified his interest in food photography.  “The food was amazing–the way they presented it,” Bill says.  So he shot food on his own and found his niche.  His first assignment was to photograph every category of food for Food Emporium.  In the last 13 years he has been photographing food, photography has seen many changes–most importantly, the transition from film to digital, and the ways in which that made taking photographs easier. 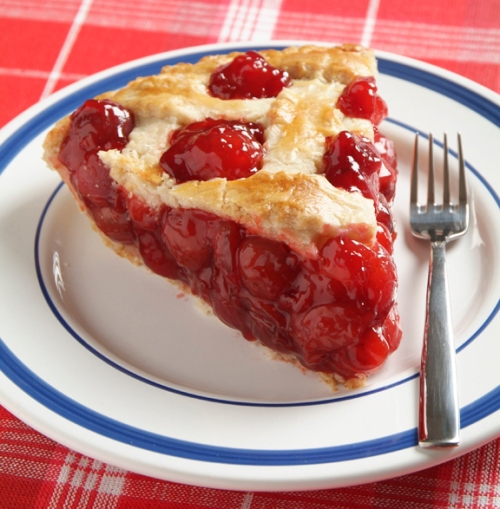 I recommend checking out Bill’s very cool blog where he pairs his food photography with reader recipes.  Also, stay tuned for my review of his book as I start my adventure into food photography for my blog.