Periodically, there’s an article about how Little Italy is dead or dying. Yes, it’s more of a tourist destination and less of a neighborhood where Italian people live. There are still some Italians there, and there are Italian-American-owned businesses there. A recent article in the New York Times made me want to write a series on Little Italy Isn’t Dead and feature some of the businesses there.

In 1891, the first part of the Most Precious Blood Church was built by the Scalabrini Fathers and later the Franciscans, who took over funding. It served the local Italian-immigrant community. Mulberry Street became home to immigrants from Naples who celebrated that city’s patron saint, San Gennaro. Most Precious Blood Church is the National Shrine of San Gennaro, and this is the site of the San Gennaro festival that occurs each September. 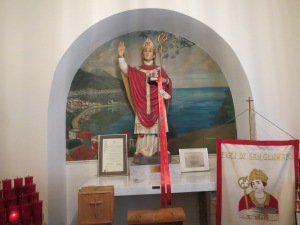 The church has a mass and the procession of the saint’s statue begins from the church’s front entrance on Baxter Street. There is also a shrine to San Gennaro inside as well as a beautiful grotto.

Another entrance is on Mulberry Street as well as a courtyard where you can pin a dollar on the statue of San Gennaro during the festival. Now, the church has masses in English and Vietnamese.

–Dina Di Maio, author of Authentic Italian: The Real Story of Italy’s Food and Its People, available at Amazon.com

***All writings and photographs are the intellectual property of me, unless I’ve noted otherwise, and can only be used with permission. If you are inspired by this blog, please use professional courtesy to note it.***