The sfogliatella (sfogliatelle, plural) is a popular Neapolitan pastry eaten for breakfast or dessert that is also prevalent at Italian bakeries in the United States.  There are four varieties of sfogliatelle that exist in Naples–the shell-shaped riccia, which is the classic sfogliatelle, often with a ricotta-based filling;

the circular frolla, which has a pasta frolla crust and the same filling; 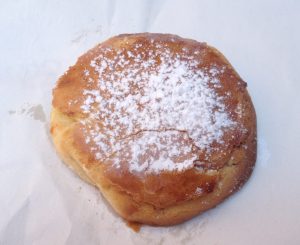 the santarosa, which has a custard filling and cherries on top;

and the lobster tail, a longer version of the sfogliatelle riccia.  The classic shell-shape of the riccia, santarosa and lobster tail is named for its many sheets of dough.  Foglia means “leaf” or “sheet” in Italian.  It is very labor intensive and difficult to make, so one usually buys them in a bakery.  In contrast, frolla is easily made at home.

The traditional sfogliatella riccia was first made in a Medieval convent in Naples.  Pasticceria Pintauro in Napoli’s Quartiere Spagnoli, or Spanish Quarter, a historic area of the city, is about 200 years old, although it has had different owners through the years.  It is known for its sfogliatelle.

As is Antico Forno delle Sfogliatelle Calde Fratelli Attanasio, a bakery not far from the main train station, opened in 1930. It comes hot from the oven–just how it was made in the convents of old.  Attanasio’s is by far the best I’ve ever had.  The thin layers are crisped to perfection for a wonderfully crunchy bite.  According to its history, it is not only supposed to appeal to the taste buds, but the ears as well.

The santarosa is named for the convent where it was first made, Monastero di Santa Rosa, which is now the site of a hotel on the Amalfi coast.

In New York City, sfogliatelle riccie and lobster tails are found at most Italian bakeries.

–Dina Di Maio, author of Authentic Italian: The Real Story of Italy’s Food and Its People, available at Amazon.com